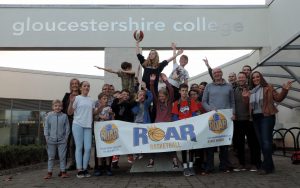 weekend for Herefordshire Junior Basketball with ROAR taking part in the first ever u12 Regional League Tournament.

The Regional Basketball League is the highest level of competition for players of this age, the best of whom can expect to progress to National League from 14 years.
It is also really significant in helping to develop players through in the Basketball England Player Pathway and potentially the Regional Performance Centre (see Player Pathway)

Our own mostly u10 ROAR players were joined by a Leadonite and 3 Saxons, all genuine u12 players.  Collaboration between teams to give players the opportunity to perform at the highest level is something we will always encourage at ROAR.

On the Day, we had a number of strong individual performances.  Importantly though, as a team we improved through the day.  Our defensive positioning and movement in offence both began to come through.  The point of being on court with the strongest players in the Southwest is to be able to learn and improve.  There are certainly many take aways from the weekend. 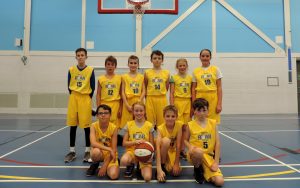 For the games themselves,  ROAR led the Bristol Flyers after the 1st qtr 9 -8.  Quality, conditioning and strength came through for Bristol Flyers winning 50 – 15. Scorers Brooke 10, Bodhi 3, Dan 2
Dorset Storm then went up against Flyers with Flyers coming out winners 48 – 28.
In the final game, ROAR had another bright start but again the strength and experience of Dorset Storm showed, particularly against the ROAR bench with Storm winning 50 – 26.  Scorers Bodhi 8, Brooke 6, Dan 6, William S 6.

Encouraging signs for ROAR winning a quarter in each game and drawing a quarter with Storm.  It shows the players can be competitive at this level if they work on their strength and consistency.
Brooke Beveridge had a terrific first match day as a ROAR player.  Working well in the pass and cut offence to find opportunities, chasing rebounds and terrific defensive positioning too.  ROAR player of the day and comparable to any player on the floor from any team. 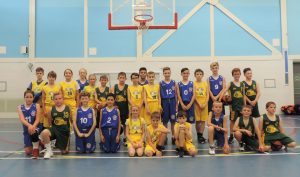 As always huge thanks go to one of our sister clubs Gloucester Saxons for allowing us to use Gloucester College as our home court and the officials that managed the matches in a really positive and efficient manner.  Parents, you can be proud of what your players achieved.  One more step on our basketball journey.